The Democratic Republic of the Congo is in central Africa. The people who live lower reaches of the Congo River are known for their power images.

Large standing male, with nails and blades stuck in his chest. 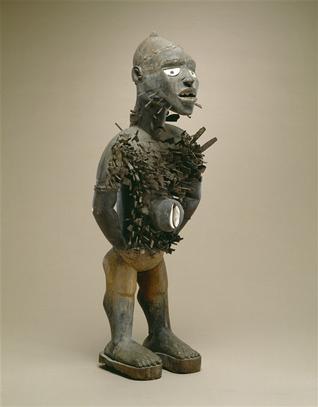 The body of the image is sculpted from wood. Nails and blade are nailed into the chest and chin of the figure. Cowrie shell is used on the eyes and the belly. The facial features such as the eyes and mouth are large and simplified. The large head is emphasized. Even though it is simplified, the artist shaped the figure around muscle volume, which makes it more life-like.

Power figure! This piece was consecrated by a trained priest using precise ritual formulas. The image is thought to embody spirits that could heal and give life or inflict harm, disease or even death. Each figure had its own specific role and wore particular medicines which protruded from the abdomen in a large cowrie shell. The Kongo people activated every image differently. Owners appealed to a fgure's forces every time they inserted a nail or blade. This was supposed to prod the spirits to do its work.  People invoked other spirits by a certain chant, by rubbing them or by applying special powders. The role of the figures varied enomously - curing ailments, stimulating crop production, punishing thieves, weakening an enemy.

Larger figures were thought to have greater powers. A figure was always benevolent to the owner. The figures stood at the boundary line between life and death. Villigers held them in awe.