This piece was created during the beginning of the Renaissance in the early 1300s. The way people think about the world and the past, about themselves and their relationship with God is beginning to change. With this piece, Giotto is leading the trend of stepping away from the Middle Ages, changing the direction of art.

In the foreground, we see 5 figures surrounding Christ's dead body. This body is being held by Mary and three women with halos hovering their heads. Here, Mary and Christ are humanized.

The middle ground contains 5 figures, one man with attributes to St. John with a look of sorrow on his face. A barrier figure, a wall, is a diagonal that splits the composition between sky and Earth. This sharp mountain ridge divides the composition between a sky full of angels and a land full of mourners. It also draws the viewer's eye down towards the focus of the piece, Christ. These angels portray of mood of pain and anguish, mourning over Christ's death.

The clothing of the figures contains drapery, contrasting the rougher nature of the rocks behind them. 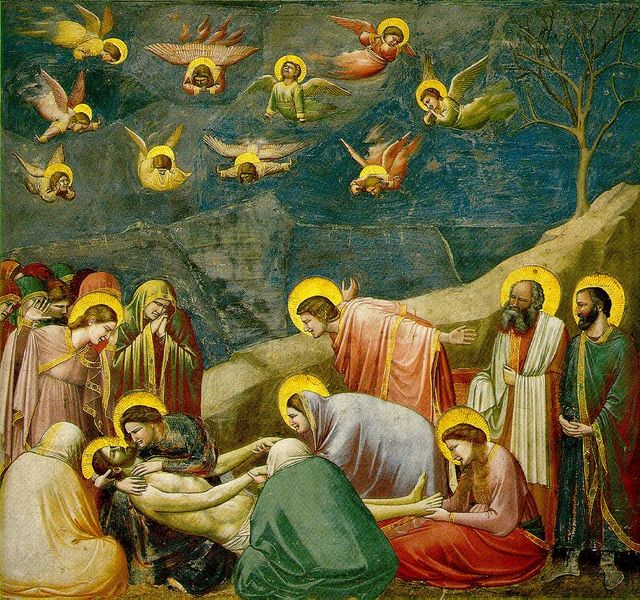 Giotto arranged a shallow stage for the figures of Mary, Jesus, Mary Magdalene, St. John the Evangelist and the others. The thick diagonal rock defines a horizontal ledge of the forground and it draws the viewers eye to the focal point of the drama - the faces of Mary and Jesus. The composition is off center. Giotto shaded his figures to indicate both the direction of the light that illuminates them and the shadows which give the figures volume. Giotto also paints 2 figures that are seen from the back. This is an innovation. By placing the figures with their backs to the viewer, the viewer automatically perceives that the other figures are further away creating more depth in the scene.

Each of the figures display thier grief which provokes an intense emotional response in the viewer.

The artist uses foreshortening to create angels and thereby a sense of deepness in space in the sky to create an illusion of space.

The background is simplified, which allows the focus to remain on Christ, the focus of the painting. The deep colors of blue in the painting conveys a mood of sadness and death.

Enrico Scrovegni is the patron of the Arena Chapel and all of the frescos within, including Lamentation. He was a wealthy Paduan merchant whose father had been a usurer (one who lend money at exorbatant interest rate). He had the chapel built, frescoed and symbolically offered it to the Virgin Mary, as depicted in one of the frescos. His intention was to rehabilitate his family name.