Made in 1310 so towards the very beginning of the Renaissance. This work and this artist actually started to set the tone for the Renaissance itself. Typically figures had been painted in stiff two dimensional forms (Byzantine) but Giotti broke the mold with his three dimensional and deeper depictions of human form.

This image depicts a traditional Christian subject: the Virgin Mary with the Christ child on her lap. Both are seated on a high throne and saints and angels surround them. The throne has a pointed arch above, and has intricate designs on both the arch of the throne and steps leading up to it. The throne looks beautiful and expenise, especially due to its golden color.

Mary is depicted as the "Maesta"- her majesty. This was a common theme at the time. Both Mary and the baby Jesus have a halo around their heads. In the back, there are 14 other figures that have this halo as well. The scene is literally packed with people, which gives the idea that many people are there to worship and see the Virgin Madonna and the Christ Child. Additionally, the figures have depth, and are very human looking-- the folds and drapery of the clothing is realistic. As stated in the context, this was a very new, revolutionary thing at the time. 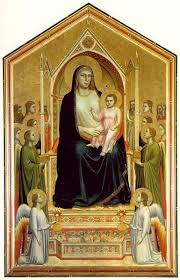 Use of light, values, and shading to create three dimensional figures. For example, the different values of lights and darks in the faces of the people as well as the folds of the clothing.

This painting has a pyramidal composition. The pyramid is Jesus/Madonna, and the two angels on the bottom. This is emphasized intentionally with the pointed arch above the throne that Mary is sitting on.

This painting was made initially to be hung in the Ognissanti Franciscan Church in Florence. It was specifically designed for the high altar. This was a perfect piece to fit there, as it is very large. It was originally commsisioned by a religious order known as the Humilati.