The piece was created by Michelangelo Buonarroti (Born March 6, 1475) in Caprese, Italy. His father owned a marble quarry and a small farm. He was always into art, but his father discouraged him from it. His father sent him away to study and he grew more into art and eventually became one of the most successful artists of his time. He created many pieces, including the David, Sistine Chapel, and the Pieta. He was very religious and his David piece was made after the biblical story of David and Goliaith. He wanted to live up to the greatness of Donatello. After 25 years of being untouched, he took the piece of block and carved the David. He believed that "there was a sculpture in every piece of stone" and it was his job to set the sculpture free. The city in which Michelangelo was from was a city that was consitently at war or fighting, so this piece was placed in the square in front of the city hall, so people in the city could identify with the victory and the outsiders that came would see the victorious man guarding over the city.

The David piece has three functions. The first function was to "protect" and show power in his city. The city in which the sculpture was placed was constantly at war with other cities/outsiders, so this piece showing the triumphant David, ready to fight. When outsiders saw this piece, they would think of the tale of David and Goliath and how the smaller fighter came to be victorious, just like the city planned to. This also consoled the citizens into thinking that they would be ok. The second purpose was to show a religious and biblical story. Michelangelo and the people of his time were very religious, so it is obvious that they would display a biblical story in their town center. The third function was a more personal function from Michelangelo. He desired to display the David as good as his other fellow artists who already created their own versions of the David.

The David shows David from the story of David and Goalith. He is shown in a strong controposto stance. This stance and his tense muscles depict that he is in motion. Michelangelo paid special attention to all of his body muscle to display his great power. His facial expression is one of great concern and anger. His eyes look toward his city of Rome. His stance depicts him to be tense and uneasy. His left hand is thrown over his shoulder, holding his slingshot. The slingshot is not emphasized because Michelangelo wanted to depict how the victory was based off David's intellegence and cunning ability and not on his slingshot.The use of stone for this piece accentuates the strong manner in which he was supposed to be percieved. As opposed to the artists before him, Michelangelo depicts David before his great battle. His right hand is extra large because in the Middle Ages was a man known to be "strong of hand." He represents the ideal male 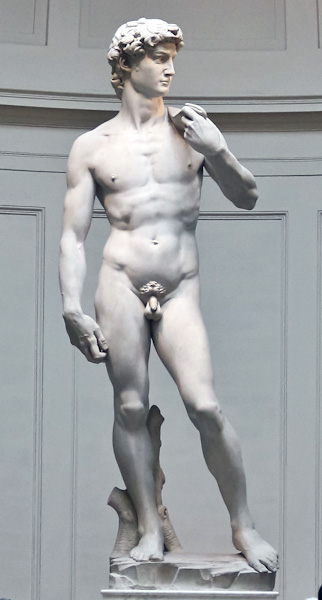 - Made of one single block of Marble

- Located in the Galleria dell'Accademia in Florence