King Henry was best kown for his ability to serpate the Church of England from the Roman Catholic Church.  When the pope did not allow him to get a divorce with one of his wives, he simply took his empire and made a new papal authority for it.  He united England and Wales in 1535 and 1542, the time when this painting was being commisioned so the portrait could have been a shoot off from the strong new unity.

The subject of the portrait is strictly a well decorated and dressed King Henry without any other characters in the painting.  He is elaborate in pose with a full frontal position and embraces his age with a full grey beard and wide girth but appears as strong as an ox.  His right hand is holding a golden glove while the other is reaching for the hilt of his sheathed dagger.  All around him is rich colors of red and gold signifying his pure wealth; taken by force or inherited is unclear. 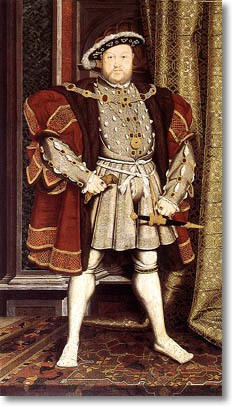 This portrait of Henry VIII is speculated to have been done in oil on canvas and wood but the mural was lost to a fire and the origin of the materials is in question.  The colors are assertive and appear as if they collectively are going against the viewer's eyes out of natural power.

This portait is the perfect example of how to depict a king as the most predatory figure in his realm.  Henry appears bold and confident with his chest plumed like a peacock.  The dagger at his waist appears willing to not only defend him in battle but to start a war.  The lavish and rich colors of the drapery all around him are victorious, regardless of how they were obtained.  It is as if he is self-possessed by his own fire and the absoulte desire to always be the hunter.  All of his people could see this and know that their ruler would stop at nothing to keep them under his wing; propeganda in it's purest form.