Skip to Main Content
It looks like you're using Internet Explorer 11 or older. This website works best with modern browsers such as the latest versions of Chrome, Firefox, Safari, and Edge. If you continue with this browser, you may see unexpected results.

Because the Fang People were nomadic, it was important that the guardians of the ancient relics were portable. This is why the relics were not guarded in cemeteries. The figures closed eyes, but muscular body symbolized a strong yet calm spirit. The face and body are very much stylized, but the hair style was very popular at the time this figure was made. That makes this work is idealized/stylized.

The Fang believe that the bones of important men and women retain power after death, providing protection and good fortune to an individual's descendants. The skull specifically was protected by these figures because the head is the most important part of the body for these people. 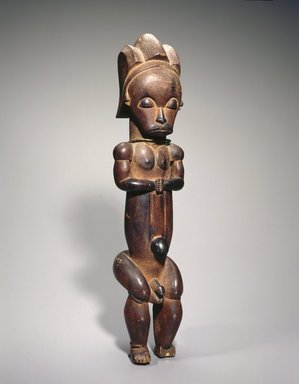 The Fang people believed that ancient relics held very strong spiritual powers.The reliquary figures were often as guardians of ancestral relics (bones and other materials in a container). They were also used during certain rituals for young men and were also devoted to the veneration of lineage ancestors and founders, leaders, and fertile women who made significant contributions to society during their lifetime.